It's National Taco Day! No one in the house wants tacos today. Ironic, I know, I can hardly believe it myself...so disappointed.

With my eldest now somewhat situated, I went back to some minor crafting. The blades I was working on were lost. Actually, half of the blades were lost. The cat my daughter has knocked them into the trash can and it was tossed before I noticed. Nothing to do about it but make more another time.

The day before I saw a Facebook post about my tatting patterns and the fact there are errors on some of them. 😳 Today, I spent time going over the first one, Lotus, and corrected the few mistakes and elaborated on the instructions a bit more. I uploaded the updated pdf of it already. I was also trying to record the tatting of it, but my eldest was also in the room at the time. It's hard to record when you have a someone playing video games with their music loudly playing in the background. Each pattern is going to be checked again for errors, so this may take some time to complete.

Today at our local history museum, they had an outdoor flea market. The family all went and the only thing that caught my interest is this little skeleton knitting. I thought it would be perfect for my mom, since she was a knitter near the end of her days. We added it to her shelf. 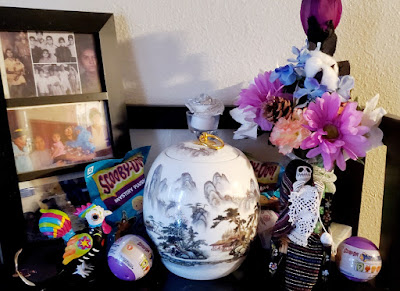 No comments:
Email ThisBlogThis!Share to TwitterShare to FacebookShare to Pinterest

Get it together and have fun doing it. 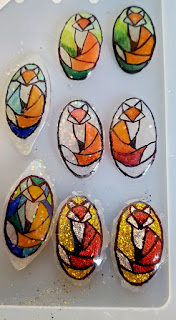 I spent a few hours making some more shuttle blades. I really like how sparkly the glitter ones are. Originally, I was going to make it grey and black but was distracted and reverted back to the standard fox-ish colors. Here is a close up of the glitter blade: 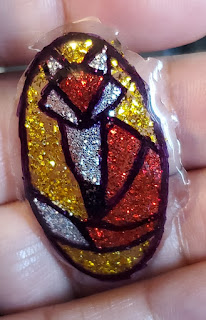 I'm still trying to make a mold that has the posts and one blade already joined together, to help reduce sanding and resin waste. The four I have done have not worked out, either they were too shallow, too deep, or had lint that was permanently transferred to the mold. For now, these will be put aside and I will go back to tatting with the first set of prototypes I made, as I wait for more liquid silicone to arrive so I can continue with the molds.
I was browsing Etsy for fun and ran across a notification that Marilee (Yarnplayer) has some more green thread in her shop. I picked up a set of two colorways in the smaller sizes, 80 and 40. 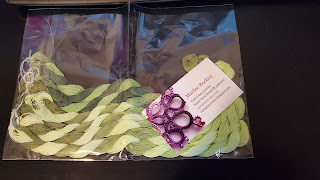 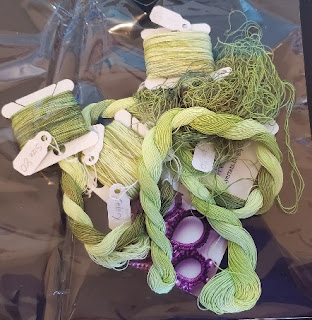 I set myself to winding them on floss bobbins for storage. I had planned to wind them onto spools, but I could not find them. Time to organize the Momcave again. To help with said organization, I got this cabinet from Hobby Lobby as a farewell, good job purchase from my final week of this job assignment. 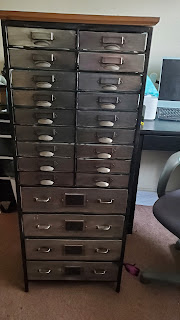 It is metal and I should have played with a bit more before I paid for it. The drawers do not open smoothly. Well, they do for the material they're made of, but I don't like the sound of metal scraping on metal. I suppose I'm spoiled on my drawers  having wheeled tracks and guide bars. I tried finding something similar made of wood or heavy plastic with no luck. I wanted the same quantity of drawers with space footprint to it, as the Momcave is pretty cluttered as it is. I really have to condense the room as my oldest will be moving back in to make it easier for her college obligations. I have to share the space with her for a few months.

I am a fan of NerdECrafter on Youtube. Her channel started as clay making but grew to include resin projects and now she does product reviews on craft kits. I find her highly entertaining. She refers to her viewers as "grains" as in salt grains, as some of the crafts kits leave her disappointed and salty from the money wasting. When she announced she would have a limited run plushie salt shaker, I had to get it. It is so cute! 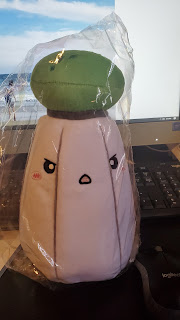 My Honey decided we will be doing "Family trips" once a month to help deal with the stress of mostly being indoors for the past months. His trips mean frequent Daiso trips for me. This time my oldest daughter's boyfriend joined us for the day. 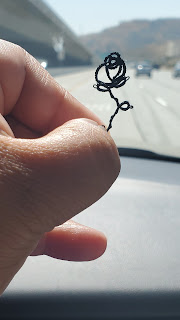 On the drive down south, I tatted a bit. I was trying to compare the sizing of one strand of embroidery floss and size 80 thread. I was also testing out one of the shuttles I had recently made. The flower is Krystyna Mura's earring pattern that was derived from Muskaan's Hidden Rose Snowflake pattern. A quick to make piece of tatting. My Honey got me this Eevee Pokemon bag from a shop in Little Tokyo. 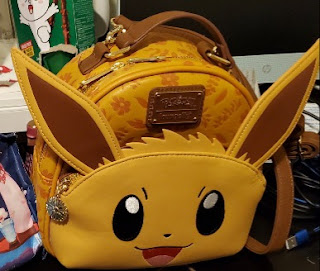 After leaving Little Tokyo, we went to City Walk next to Universal Studios in City of Industry. I got a lot of snacks from the It's Sugar store there and the rest of the family had fun in this comic book store. My eldest and I both were really wanting to try the Sakura Kit Kats and I picked up both flavors they had.  I could not taste the difference from a regular Kit Kat and these. Everyone else says they taste really good and can't believe I can't tell the difference. 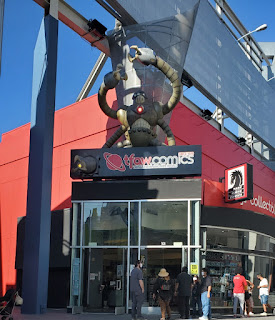 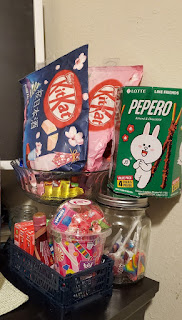 For next month's trip, it falls on my birthday. I begin my next job assignment that same week so we have to keep our celebration to the weekend. My Honey laughed when I requested we visit another Daiso store we hadn't visited before. Traditionally, we go treasure hunting, just the both of us (antique shop searching). While this is fun for us, the younger kids don't have the attention span and patience for it. I don't want to be rushed while exploring. I may just ask my eldest to stay with the younger ones so he and I can go by ourselves. My pre-teen son says to just leave pizza money and he's fine with being left behind. The youngest wants to go treasure hunting, and the eldest says she had a lot of school work to deal with. We'll see what happens as the dates come closer.
3 comments:
Email ThisBlogThis!Share to TwitterShare to FacebookShare to Pinterest
Older Posts Home
Subscribe to: Posts (Atom)