Back from the Black Hole

I've come home. I spent nearly a month at the in-laws. I missed my Cal-King size bed. I had to 'air' out the room as it's stuffy smell made me gag. Then I hook everything back up and discover.....I have NO internet! My brother, who's been house/teenage-sitting said it went out about a week ago. 0-o
Yeah, I spent the next hour with my internet provider and the tech team trying to see where the problem lays. Now, I by no means claim to be a computer tech. But I do have a load of common sense (you'd be suprised how many people lack this basic thought process) and I do read manuals. I knew the problem was not within this house. I was told a tech would be sent out Thursday(today and a 3 day wait from the inital call) and when I mentioned I'm on bedrest and the internet is my only contact with the outside world, they did their best to put a rush on it. The nice gentleman looked everything over inside, and said he would check outside since he couldn't find a problem with the equipment. 45 minutes later the problem was found... Apparently the city management team put in a new power box and didn't bother to reconnect anyones lines. I find it hard to believe I'm the only one with internet on this block. Surely someone else had to have reported problems. Oh they had?! So the tech guy has been busy for about a week. How nice of them to rush me foward of everyone else.

I did get a phone but had to take that one back. Touchscreen is too easy for my son to figure out how to delete stuff from. So I went with one that was more complicated to get stuff done on, but had less chance of losing all my stuff. And with said camera from phone we will finally update the blog. 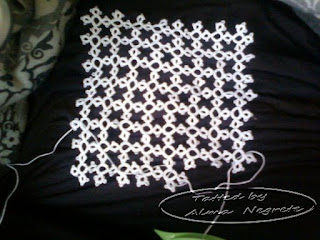 I finished the thread of one of the shuttles while doing that Hugs and Kisses pattern, but still had over half the shuttle filled on the second one. So I reloaded the empty one and kept going. I decided that until the second shuttle is empty I'll kept working on it. It's nearly double it's original size.
As far as the baby throw goes, well those shuttles and project are still in the car. 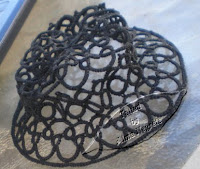 I did read over the submission catalouge for my county fair. The contests are pretty much the same thing from year to year with the addition of a "Cow" theme one. There's the frog, dog, and cat, as well as the Mexican theme and a Western theme that I plan to enter. Remember this cowboy hat I did 2 years ago?
Well I plan on finishing the playing cards, and poof the western theme is complete. For each individual animal theme I'm sure there's patterns in my folders to get done. The mexican theme has me debating on what to enter. I don't want something that everyone else would enter so I do have to give it some thought. One thing that will be entered but just for display, is Tatbit's Fantasia Fan. Primarily because it's just a beautiful example of tatting, plus I love making it. 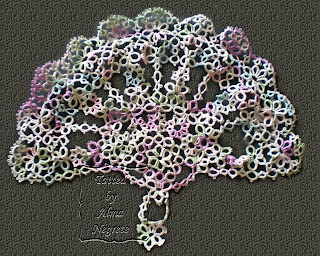 I do have to think of the colors I'll use while avoiding the many cuts and ties to do. Last year there wasn't any tatting so I have to submit a bunch, okay I'm limited to 3 items but that's where tatted jewelry comes in. Another piece of tatting listed under another catagory. I'm trying to sneak as much in as I can. Many of the pieces I've done over the past year so I don't have to actually tat too much to meet the deadlines this year. Being on bedrest does afford me time to do anything over if I feel like it needs 'updating'.
And as the newest addition to our family says "Hello" I'll go and see what I've missed this past week with everyone else.. 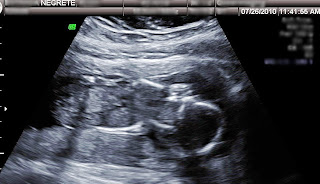