Friday's project is....The pendant and necklace! You can say I've been cheating since I worked on it on and off already. Last night after finishing the frog, I did begin on the soccer ball. I had to google some pictures on it. Then I went looking for a hexagon or pentagram pattern, hoping someone somewhere already designed one I can use. While I did get the ball picture, the closest I came to was a flowery mat. A lovely design, but I was looking for something a little bit more simple. Here are the trials... 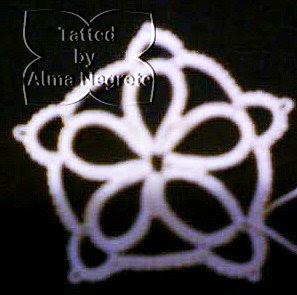 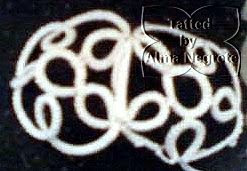 The first one I kept breaking my thread. It is possible that it was the thread or my tension, but I tatted other pieces with this same thread and no problem there.Then it turned out to look more like a snowflake than the shape I was looking for. Okay, then I decided to make the center motif with just a ring. The far left of the two joined is just rings and chains. The far right one, I added some picots on the chains so that they lay next to one another instead of on top of each other. The first of this one didn't look anything like a hexagon when finished.  When the second motif was secured I know it'll end up having the rounded form that will be needed to do the ball. Also, after adding those two picots to the chains, it is starting to look more like an actual ball. Staring at the ball pictures I got online I know this piece is going to be a bit big. It's 5 of the white blocks surrounding a black one, all the way around. I hope I don't end up making it too big because then I'll have to get a special case to display it. Tomorrow's update will show the necklace progress. My son is dancing for me and is getting upset I'm not looking at him for the entire dance..too cute.
Email ThisBlogThis!Share to TwitterShare to FacebookShare to Pinterest