Why is the light on?

Now that I've outlined a plan, I'm already not following it..
No really I had a case of insomnia last night, so rather than just lay there in the dark I irritated my husband and turned on the lights. Then I loaded a pair of shuttles....I wanted to make sure that pretty thread got used. I hated to see it just laying looking lonesome in my toolbox. I made the pendant that's in my banner. Camera clarity is shady at best it was late at night and technically I was tired. Unblocked fresh off the shuttles. 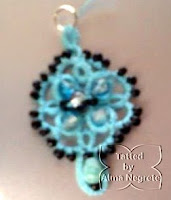 I made it with blue-green glass beads for the four corners and a black round glass bead for the center, as well as black seed beads for the outer chains. I think it looks rather dramatic.The only problem I have with it is that the blue-green beads blend in a little too much with the thread. I had been thinking of using my limited stash of Swarovski crystals but I knew I wouldn't have enough for the chain. After the crystals those glass beads just don't have enough  of a bling-factor to them. I do have some gift cards from Micheals Craft Store that I could use to get more, the problem being it's over 100 degress right now and I so don't want to leave the comfort of my A/C. Not even for a quick run to the hobby store. I wonder if they even carry the crystals in a round form. I've mostly seen them biconal, and roundness is what we need.

I'm off to work on the fan...for a little bit at least...I kept wanting to play with this pendant some more...
Email ThisBlogThis!Share to TwitterShare to FacebookShare to Pinterest