It's starting to come together 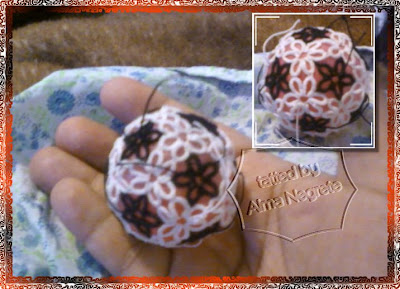 Today's treasure hunt consisted of finding a few balloons I had left. After a long search I found two out of the pack. One of them didn't hold any air at all, the other leaked it. Since it wouldn't hold it's shape together long enough to properly starch I decided to blow it up and snap some quick pictures. Here is the soccer ball with it's correct shape. The one in my hand shows air has leaked out already, it's starting to collapse on itself. Yes, I still have to hide those ends, and tie two different motifs together where I forgot to join. Now it looks more like a soccer ball right? It's made with size 30 black and white thread. The pattern is pretty straight forward, except where to join. I wonder if it's worth the time to diagram it? I probably will because I may want to go back and redo this sometime in the future and I'd rather have a pattern than to stare at it and try and guess how I did it. 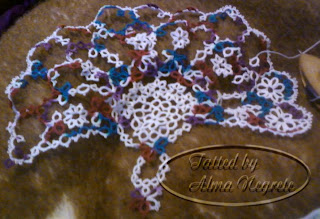 And here is where I must leave off on the Fantasia fan. There is enough thread left on the shuttle to maybe finish the current motif I'm making but that's it. I did the outer chaining first, because I wanted to make sure to have that done. Now I only have to worry about one shuttle instead of two when I go back to it. I don't really like how there is so much more blue than the other two colors. I don't know if all the Jewels from Lizabeth are this way, but it did leave me slightly disappointed. I would have loved to see a better balance between the three colors.
On my craft shopping list:
I should probably wait on the frames until after the fair. The display cases, I was told to search for model car display boxes. They come in various sizes and most are rectangle, the shape I'm looking for. As for the foam sheets, I'm making a jewelry display from an online tutorial and it calls for the foam to mount onto cardboard. I also thought to use the came concept for the doilies. I will pin those down so if the judges need to handle the pieces they can. The only two tatted items that won't have any special packaging will be the frog and the cat. They just need a little bit of stiffening and they're good to go.
Email ThisBlogThis!Share to TwitterShare to FacebookShare to Pinterest