Boy, I sure am long winded

I feel better, poor Honey is worse. We took him to the hospital last night, his face was swollen, it looked like someone who was allergic to bees that got stung. Turns out his illness was worse than we thought. His lymph nodes are swollen and they believe the culprit to be his tonsils. Right now he's supposed to be resting but we had to take his doctor notes to both of his jobs. Let's just say one of his bosses is a total ass, and that's me being kind. I wanted him to quit on the spot but he wouldn't. I think the pain killers had alot to do with Honey's more accepting attitude.

No tatting right now. My fingers are getting stiff right now and manipulating the shuttle is rough going. So I went to crochet. After doing another row on the simple blanket I decided that I want it to be two colors. I love the green I got but had the thought that it looked like puke green run through my head and now the thought won't leave. Now back to you-tube to learn how to add a second color. Without having a bunch of knots, that is. Is it even possible?

I found a full skein of size 10 bamboo thread and one that was mostly used up. I also found a booklet on baby blankets that I purchased back when I was first put on bedrest and stayed a few weeks with the in-laws. There was also a package of plastic crochet hooks. Those hooks turned out to be trash. They kept snagging on the thread and the yarn. Now the recommended hook on the bamboo is 7 or 1.5mm, and I only have 2 sizes to work with. The 10/1.3mm is the closest in sizing so I'm using that. Here is the result of that: 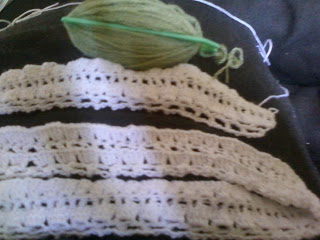 That holder with the green is a splice of the bamboo/acrylic. My son had hopelessly tangled up a skein of it. I guess he loves the feel of the yarn because he kept rubbing it up against his face and arms, like a cat. I took that mess and split the 6 plys into 3. Okay I only did a little bit, and it split pretty much on it's own. The only problem I had was little bits of fuzz that would accumulate from friction, that I kept having to cut off. I got the white bamboo from Walmart and I think I'm going to get some more. The skein says it's 300 yards and the pattern calls for a total of 1790 yards. I'll use what I have now and see how much more I have to get, especially since I'll be switching between the white and green. I can also use any left over thread in white to tat with.
Email ThisBlogThis!Share to TwitterShare to FacebookShare to Pinterest