For my family to get sick. At first it was my daughter, she stayed away until she got better. Then my son, who stayed sick for roughly two days and is now back to his ol' hyper self. Now my husband is currently wrapped up in it. It seems to have hit him the hardest. I haven't gotten sick yet, thankfully. Ironically, Honey had wanted to go get the flu shot. I don't know if he actually got it and that's what's making him ill now, or if it's just the changing of the weather. It happens to him every year. Either way it's time to bring out the coffee pot and make a bunch of tea for the family.

On the tatting front:

I loaded up those lovely shuttles I just got and began by making a hummingbird. Then I tried adding a flower to the top. Then a vine. Here is the result of that: 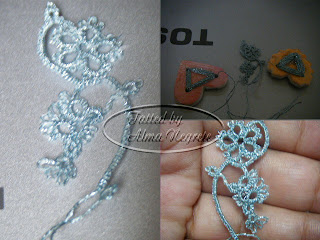 I like these 3 hole shuttles alot. The way the thread is wound makes it easier to hold the shuttle. I'm not a overly enthusiastic fan of flat shuttles, but these are some of the easier ones I've used. It has to be the way the thread is wound.
On the crochet front: I undid it all again. I want something pretty but so far all I seem to be making is ugly. I don't know what it is, but it just looks too chunky. I have the option of working the blanket with size 10 thread, which would give me a look closer to what I want. But I also want it to be soft. It's very fraustrating because you can't it both ways. Unless I'm willing to split the yarn...too much work involved there. I wonder if they make bamboo thread in size 10?
Email ThisBlogThis!Share to TwitterShare to FacebookShare to Pinterest