A small bit of snow

Here is the first try of getting myself together, tatting wise. 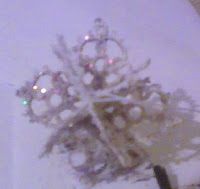 It's a snowflake I tatted up a couple of weeks ago. I was stiffening it with glitter glue. I made three of them with size 30 white thread. One will be a gift, another will hang on my tree, and the final one became the trial and error on stiffening agents. I will try and find my camera to take a more detail picture because it really is pretty.
Then I went through my toolbox and pulled up 2 random shuttles. One was my GR8 shuttle that has some verigated green thread so I went in search of the mate for it. I found some more of the color, but the sizing of thread is not the same. The GR8 has size 20 (?) and the clover I found with the same color appears to be either 40 or 50 sized. I'm not going to be too picky and began tatting up a wreath with the thread. The other shuttle I pulled up was one of my buffolo horn. It only had a small bit of the aqua 30 thread I dyed. So I removed that and wound it with some thread I got from Heather , it's called Berry Punch. It's a pretty blue/lavendar/pink combo. I'm not sure what to make with it. Maybe some jewelry-ish tatting. Recently there has been a bit of resurgance on a pattern by Tatbit that I made, so I may remake that bracelet with this thread.
I'm also going to do two patterns with the stretchy cord just because I have no direct direction and the change in feel of the medium might be what I may need.
Tomorrow we have the follow up with the doc. Honey said that he puts his money on the baby being born before the end of the year. I have to agree with him. I have literally popped out and the baby has begun to 'drop'. It's incredible difficult to sit, the belly is very heavy and hard to position and the baby won't stay still for too long.
Email ThisBlogThis!Share to TwitterShare to FacebookShare to Pinterest