Making progress. I had to stop here because I realized I placed the beads wrong on this ring prior to the chain. It is supposed to have two beads not one. Looks like I have some retro-tatting to do. The pattern shows two block clusters at the long point of the cross but Karen's example has three, so I followed her picture of the finished rosary and added the third block section.
I do have to say that this particular pattern is an advanced pattern. You have to plan ahead and figure out how to place the split rings and exactly where to the blocks you should join. While the basic ring double stitch is given, when you come back up with split rings on the long section it isn't as easy to figure out. Or perhaps its just me and my late night tatting to blame for that. One side of the ring is your 4 bead 4 but the other side you must first anchor to the block corner than tat 4 then anchor again then the final 4 of the ring. I got confused on where I was several times.
So now I'm calling it a night and setting this down for tomorrow. I hope to be better rested and make fewer mistakes as I go. Goodnight Tatland see you in the morning. 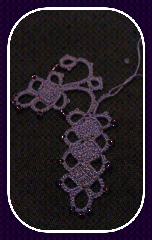