I got an email that the entries deadlines/rules for my county fair were changed this year. Apparently everything has been moved two weeks earlier than prior years. I called the number listed for more information but its a recording saying that any updates will be posted online and the scheduling was "tenative". That means they are thinking about but haven't really decided on anything. Not wanting to not have my pieces ready 'just in case', I went to work on my fair entries.
One piece that I really want to get done is my pinata. I haven't found anything remotely close to this as a pattern online, so I'm working on the fly, so to speak. I started playing with a Burda pattern last year but after pulling it out I decided to go with something else. The problem was the negative space, it was too open and would not hold up to all the chaining I'm going to have to add as the frills of the pinata. I found a pattern that was another thicker edging and after a few rows, decided it would do for the base of the body.
Two days later, the main body space is 60% complete. I have to decided how to flow up to the neck without a bunch of tie and cutting, so there is split rings and chain work in it already. It's being work with size 20 Aunt Lydias crochet thread, just because its what I had near me when my mind went into freak out mode. As a reminder the pinata is a donkey since traditionally that's the form used and it's also the most easily recognizable. 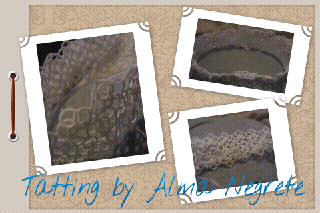