Trying to reach a decision

I began working up different motifs to be made into the retirement gift for my coworker. The one on the left is from Tina Frauberger's Schiffchenspitze 1919 version. This book is available online for free  from the Online Tatting Class. I was actually thinking of doing the mat on the cover photo, but thought it would take too much in blocking to get it to retain the shapes of those long chains. Then I changed my mind and decided to do the Tatted Luncheon set from Tatting by Penelope Book Two. I bought the revised version of this pattern by Rozella F.Linden aka Ruth Perry on Kindle. The great thing is that you can literally make the mat as large as you want by simply adding more motifs. 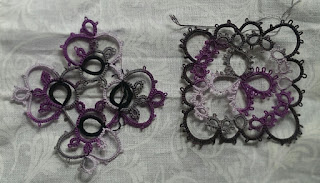 Then the idea came to add beads in place of the picots on the first motif. I also changed the thread color. I love the extra look beads can add to tatting. I don't like having to string them up or push them back on my thread. I didn't get far into even starting the motif when I called it quits with the beads. 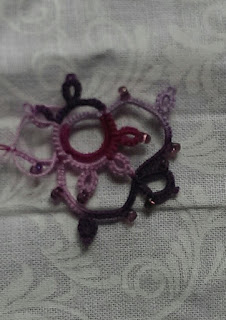 I honestly prefer the look of the Tina motif better, but the Penelope one looks more feminine and the variegated thread seems to be represented in a more flattering light. I only have a month to make this so I'm also taking into account on how long it takes to tat up each motif. Ironically, it's only a 15 minute tatting time difference. Keeping track of the picots on the second motif is what has slowed me down. 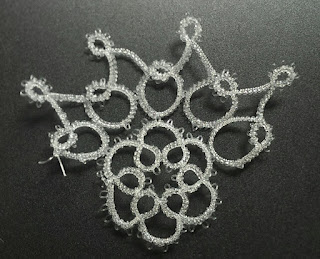 I began working row two of the Snowflake doily by Renulek with the fishing line. One plus to using this line verse thread is that you most likely won't need to block it when you are done. One negative is that the picots become lost. You can see the chains and rings are very obvious. The picots seem to fade into the background. I'm thinking of restarting but leaving all but the connect picots off. Hopefully, it will still look like the original when it is finished. A few rows of this doily might make a good backdrop for a suncatcher. I can fill in the spaces with different colored resin...oh the ideas are starting. I can't be tempted though, too many projects to do already. Maybe I can practice on this little piece. 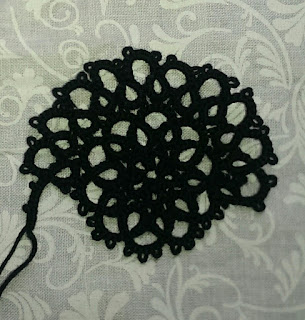 I also go distracted by the little top hat by Amalie Berlin. You can get the pattern from Craftree.com. Her instructions don't tell you which picots are joining, so just assume ALL picots are for joining. I made that mistake and missed joining the first two rings when I started this third row. This is being worked with size 10 thread. 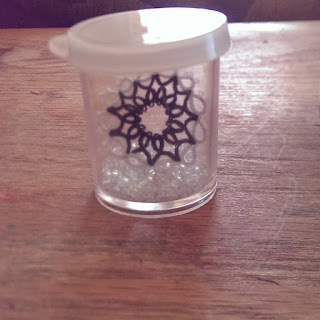 Here we have the starting center row to Jan Stawasz's Monster doily. I was contemplating beads again. I have to put that inclination away. I kept it with these beads should I ever really go back and want to add them. I liked these one.
Email ThisBlogThis!Share to TwitterShare to FacebookShare to Pinterest