The pattern was originally shared on Facebook by Angela Gambka. She also made a video to show her technique, which I found incredibly useful. I finally got my Rewards stash of the month from the Sears Rewards Program and plan on using the beads for it. I have that coworker who loves anything butterfly, and at least I have someone to give it to when it's complete. Since this involves beadwork and a lot of it compared to my normal tatting activities, I'm going to wait until I have a full day off from my IRL to start this. 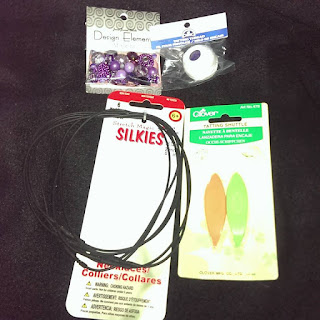 I've also worked on my version of Jan Stawsz's Monster Doily. I picked up another ball of size 80 DMC ball in white and definitely need to pick up a couple more not to mention the same size in black. I'm of the mind set to use up all my fine thread up on larger projects so then I can justify to Honey adding to my shuttle and thread collection. After all, if I don't have supplies how am I suppose to relieve stress? 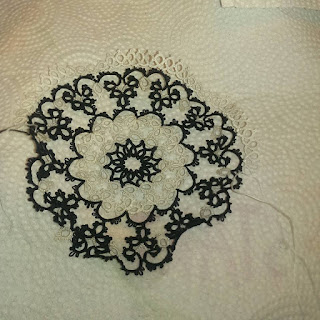 Originally, I had started this last year sometime but put it aside. I wanted to clear out my size 80 threads and since this was begun in that size I went back to it. I used the new ball of white that I picked up and realized I misplaced the black ball. 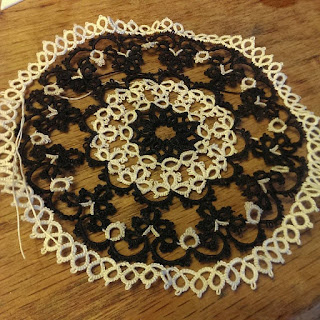 I was going to do all the rings in black and white as my second color but since I couldn't originally find the thread ball, I did the row in all white. I actually like how it turned out. There's another section similar to this and I'll probably do the same thing again then. 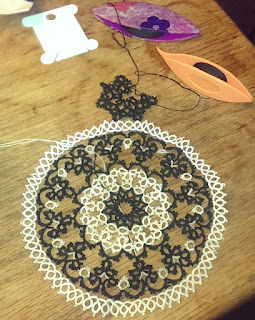 I was planning on doing the snowflakes in this area in the mix black rings and white chains but since I did one row solid, I went with solid black. I found the little card with some black and it was enough to load a pair of shuttles. This row is a bit annoying to work. I'm used to having picots being more or less evenly distributed. The awkwardness of the five picots on one side to the three on the other is throwing my rhythm off. I think it also didn't help that I joined backwards from what the pattern diagram shows, so I'm having to reverse the counts in my head. 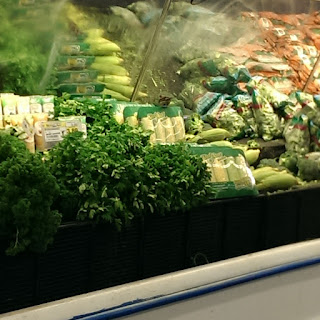 When we went grocery shopping, I saw this little bird flying around. When he finally perched I snapped the photo as quickly as I could before he flew off.