My project for this month is figuring out and tatting up one of the Trove newsletter patterns. This is not my Pintrest challenge piece. I began with the largest thread size I can comfortably tat with, but after a few false starts, I dusted off my Tatsys and loaded them with size 10 thread. This made a lot easier to tat.
When I began the actual tatting I encountered a problem reading the pattern. I'm used to beginning in the center and then working my way out. This is how all patterns I've tatted have more or less started. My mind was trying so hard to make the instructions given fit the grainy photo. It turns out that this particular pattern begins on the outer edges and works inward. I read down to the bottom and sure enough there was the label I was seeking: Center. 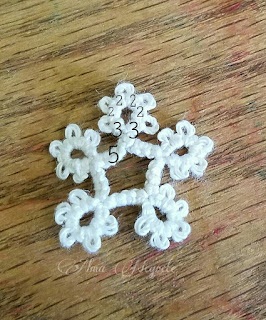 I did have to read even these instructions several times before I understood. I'm including stitch counts here in case someone else would like to tat this up and has difficulty deciphering the pattern. This seemed simple enough after it was finished. Then I moved on to the outer frame of the center. 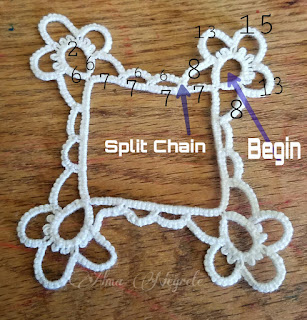 On this section, I used a split chain to reduce the cut and tie. The inner chain, I had to remember not to "push" my chain too tight. If the core thread is tightened too much, the square of the frame will turn concave. The pattern states to tie both threads to a chain picot before the ring, here is where I split chained it. I did begin the row with the ring and tatted around to where the last picot would be, then split chained it there. It was actually an easy split chain for once because I was able to hold the work like I would hold my piece when doing a split ring. The center was large enough to easily pass the shuttle through, so my chain turned out neat and crisp. 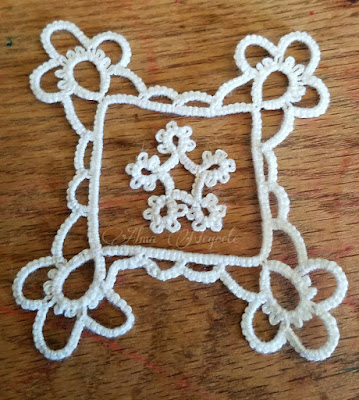 Here is the center completed. The original pattern has these elements joined with other types of lace to create a fine "netting" that it will fill up the empty space in the center. I think I will use some size 80 thread and do a mignonette net here. Or maybe finally get down and learn some Oya techniques and fill it in that way. I still have a bit to go, so that will be the final session on this piece. Now I'm off to tackle the 'arms' of the next section.
Email ThisBlogThis!Share to TwitterShare to FacebookShare to Pinterest