I have been sadly neglecting my shuttles for the past few months. I have been working with yarn though, crocheting, that is a WIP in itself. I was bored and picked up the brown (chocolate) Clover shuttle and after loading it up, went on Facebook for inspiration. I found it when a fellow tatter posted a picture of a tatted spoon. A Spoon! The pattern is Roger Freedman and was posted on a needle tatting group from MSN. The way back machine was the way to find the pattern once more. I made this first one with some DMC metallic thread. 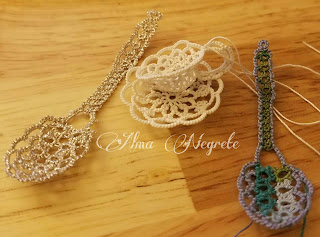 Then I thought to also make the cup and saucer that was also on that site. However, using the same thread resulted in a spoon too large to complete the set. I received some size 50 DMC thread so I made the cup and saucer first. I was then planning on making the spoon out of size 80 or even 100 thread. I picked up a few balls of both sizes a couple of weeks ago. 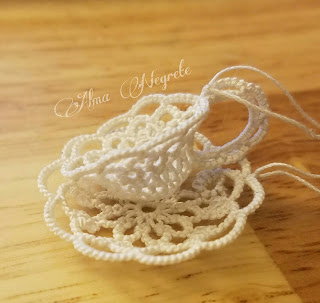 Her ends need to be sewed in and tucked away but she still poses for a lovely picture.
Email ThisBlogThis!Share to TwitterShare to FacebookShare to Pinterest