It's crunch time for the fair entries! I was about halfway done with my "rainbow" entry, then Butters attacked. He completely destroyed my work. I'm having to begin again. 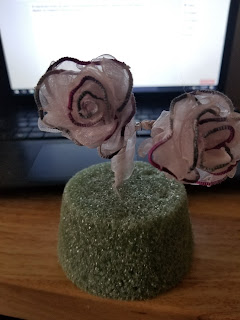 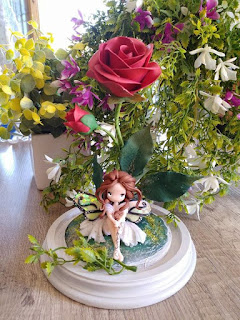 This is my inspiration. It's going to have butterflies in rainbow colors swirl around it until the final butterfly rests on the rose. I had actually a clay lady that I was going to make wings for, and had it sitting on the piece to figure out measurements for the butterflies. I went to work and thought it would be safe when I got home. Unfortunately, it wasn't. Everyone at the house was being evasive when I asked about my project, which let me know the dog got it. I was thinking of just making it all clay but I had already submitted my entry forms and it is listed as tatted (mostly). The first run had different styles of butterflies but because of time restraints, I'm just going to use LaCossette's pattern. It may not be as dramatic as the previous version, but I believe it will still be lovely.

Project 2: After completing the roses, I switched over to the next entry: Karen Cabrera's Rosary. I wasn't sure what color to use. I went in search through my beads to see what I had enough to do this project with. The beads were on the smaller size so I began with size 50 thread. 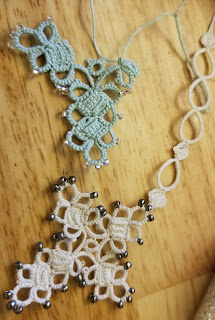 After the cross and the first part of the "chain" of it, I realized it might be too small when finished. For a child, it may be good but I'm thinking most people would expect it to be adult sized. I was also having doubts about the seed beads being too large for the project. I began again in size 20. It did increase the overall size a small bit however the seed beads seems to fit the overall shape better. Size 10 would probably be best for an adult size rosary, but the beads for the chain would end up being too large for my preferences.

Project 3: It's labeled as bracelet made in the Ankars style of tatting. I finally have something to use the many bracelet findings I've been collecting on.

Project 4: Is Jan's Monster doily. I have some great news on this front! Now, I had lost my project at work a couple of weeks ago. It was found earlier this week!

Project 5: It's not in the needlearts category . I actually have it listed in the "Adult Crafts" section. This is where I wanted to put in some crochet. The was a limit on how many entries you can put in the needlearts section so I got creative here. I'm crocheting a large Pokeball with Evee, Vaporeon, Jolten, and Flareon pokemon in it. The pokeball is going to be in size 10 crochet thread. The pokemon themselves are being made with two strands of embroidery thread. The pattern for the Pokemon themselves is by 53stitches. They are being made in the chibi style of crochet because who doesn't love cute little things. 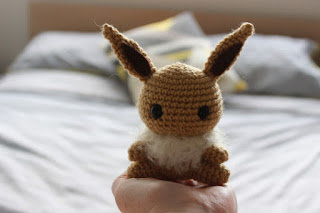 This photo is from the website, not what I've actually made. She is still in progress. I think I should be able to finish these in two days. I seem to be able crochet faster then I tat.