First on the agenda, finishing Jan's Monster doily. I really want to enter it into a fair. I'm thinking the State Fair since it's coming up in May/June. If I don't complete it in time for that, there's always my county fair in the fall. 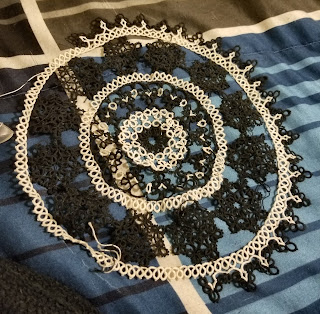 These rows seem to take me much longer. I foolishly thought this round would go fast because of the lack of picots to keep track of. I was wrong but at least I've made it halfway around.

Ice drops were on the tatting menu as well. I purchased a multi cabachon resin mold in different sizes, now I have something to use those finished items on. 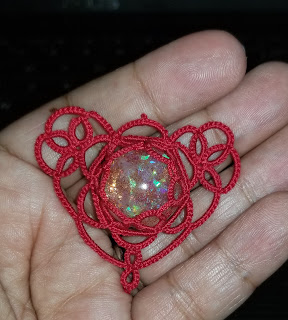 Diane also posted a Heart version on Facebook that I had to try. This one was tatted in size 20 Lizabeth in Christmas Red. I used the middle sized cabachon with this.  I did have to increase the base stitches by 2 on both the rings and chains took make it fit. I also did the same for the rings and starting curve of the heart. For the longer side chains, I used the numbers she originally used. I'm very happy with how this turned out. The cabachon had a high dome so if I was to embed other items they wouldn't be obscured by the side chains by much. The Birthday Ice Drop is one off my favorite drops to make. I made one with a lower dome so you can see the difference.

I did have to make a trip to Hobby Lobby took get that red thread to make the heart. Honey was afraid I would get carried away while there buying craft supplies I would most likely never use. We found this small pouch/bag, and it was "suggested" that if it didn't fit in the bag I couldn't get it. It was a good idea because I can get carried away quite easily there. It did help as all I picked up was what I originally intended, thread. I added a small string of beads and a size 14 hook. The rayon thread was added because I plan on making a crochet doll and I liked the sheen on this ecru-ish/flesh tone color. 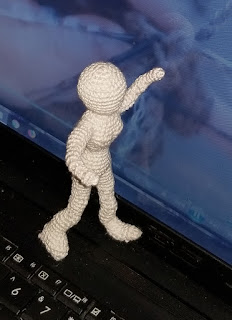 This was my first try making the crochet doll from a YouTube tutorial. Butters, the dog,  promptly stole it out right after I made it. Yanked it right out of my hands and hid under the futon where I couldn't get to him. I wasn't too upset because it had a lot of errors in it. I'm not usually fond of humanoid dolls but this one is going to be part of a set. It's my Pokemon trainer and I have a few "Eveelutions" already made to go with it. 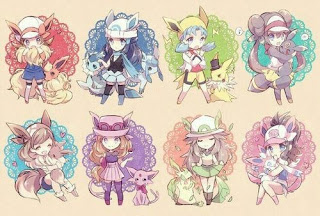 Something along the lines as this but with only one human trainer.
Email ThisBlogThis!Share to TwitterShare to FacebookShare to Pinterest