Let's start with the most recent, then work backwards. Some of you will find the post has some familiar items in it because I've posted to Facebook already. A few nights ago I was beginning to tat up some flowers to add to some shuttles I plan on casting next month. This is a blade from one I made a few years ago. I wanted to make a mold out of it, but it wasn't possible as it was too flat and wouldn't hold the curve for a post shuttle.

I got distracted, and ending up making interlocking rings (celtic). After a few were made, I noticed that depending on how they overlap, they can look like a flower. 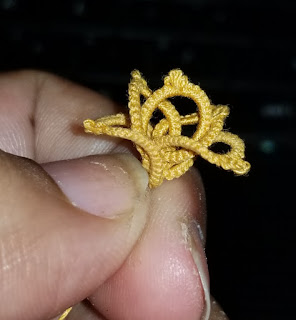 They unfortunately didn't stay put. So I played around with different ways on how to run the thread so it would stay where I wanted. In the end I just joined the two larger outside rings to one another and it worked! 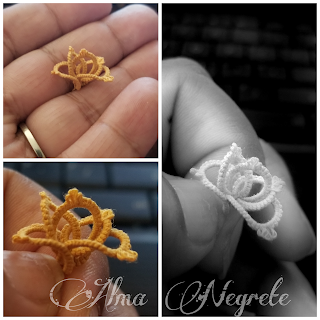 Now in theory, it was pretty straight foward, and joining to the first side of one was easy and normal. The tricky part was turning the work so it would lay properly before joining to the second picot. I did record it when I tried to make a second one of these blossoms. The footage has about 2 minutes of me just fiddling with the thread before finally getting it right. The hardest part was closing that last ring. You can't just 'tug' the ring closed, you have to walk it in sections. It's a slow manual closing in tiny portions at a time. If you tug, your thread will snap. I'm looking for an unused Tatsy shuttle so I can make this in size 10 thread to create a tutorial for it. It's had good feedback on Facebook, and people seem to want to recreate it.

The last couple of posts mentioned storage solutions, and here is another one. I ordered this photo storage box on Walmart.com for $8 USD. Inside of it is 6 smaller containers meant to hold 4X6 pictures. This is a wonderful for when my projects grow larger, I get distracted and put them aside for another. I can print out the pattern on a 4X6 photo paper so no more trying to remember/ decipher what the project is, and just stick it in there along with the shuttles and thread.

I'm most likely going to order the larger 5X7 sized bundle, but that was more just a 10 pack of them with no box to store them. If you want to look at them for yourself, they are labeled as " 6 pack Photo Keeper". Michael's and JoAnn's both had something almost identical for two to four times what I paid for this. Oh and it's acid free archive safe.

On Facebook in one of the tatting groups there was a post about how they stored their shuttles in old thread display boxes. It motivated me to finally make up one that I purchased supplies for months ago. The progress from a wood cut out, the shelves and sides being made, the painting and attempts at decoupage, and finally, the finished pieces!

The shelves have a small lip on them so the shuttles don't fall out by accident. I couldn't decide whether to add some hinges and cover so I left it as it is. I have a much larger one that only needs the shelves to be cut that I think will get that hinged top to keep the dust out better. 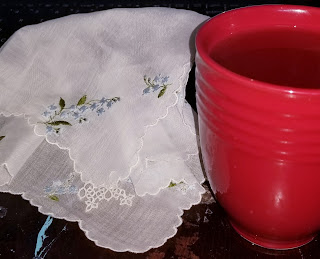 This lovely hanky was one of the treasures I found while checking out antique store with my Honey. It was calling for some tatting to decorate it. I searched for a pattern that would compliment the curves of the fabric, but this was harder than I thought. Most edging patterns are straight edged. I found one on Pintrest that could fit depending on where I joined to the hanky. This was a test tat run to see how it would lay and how to space the joinings. It's being worked in size 100 DMC thread. I can't tat and not drink tea. In the cup is cinnamon tea I learned to make thanks to a recipe from Pintrest as well. Originally, it had cream and such in it but I didn't want all that extra sugar so it's just cinnamon and water. It's sweet enough on its own. 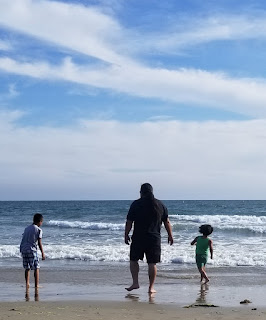 Let's end this post with a snapshot from the beach. The kids are getting so big now. They didn't want to leave, and complained the entire way back home. We didn't bring Butter's with us because this trip was completely sporadic. Next time, we'll bring the dog so he can play as well.