This past Friday was my last official say working for Sears, my store is now closed forever. I went down south with the family for some retail therapy. 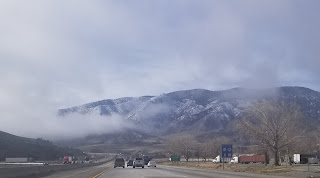 My oldest daughter was able to join us, so our first stop was DAISO! We went to Little Tokyo in Los Angeles. 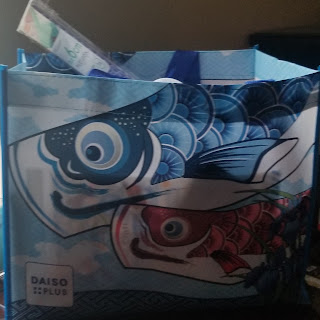 This cutie bag has just been added to the collection. I have some crafting kits now added to the to do box. I wanted to try some shrink plastics and I picked up a pair of sheets to do just that. If it's something I enjoy doing, Michael's and Hobby Lobby both carry it locally. I just couldn't pass up the two felt animals. The kitten is a key chain miniature and the dog was just too adorable. I also found some UV resin so I picked up 6 packets. The portions are really small but with 6 tubes I should be able to complete a project. 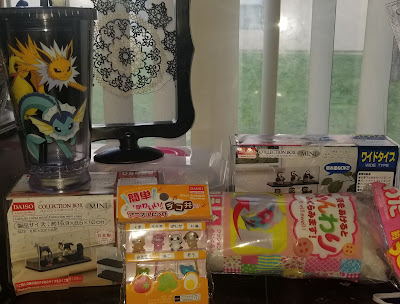 I picked up two different sized display cases for some 3D tatting items to hold. The pics in the front had cute little animals so they had to come home with me. The stuffing would also come in handy when I go back to crocheting my Pokemon Eveelutions. Speaking of pokemon, I got found a light up Pokemon cup! This was from Gamestop not Daiso.

We ate so much food! It was a really nice family trip to wind down.

In one of the Facebooks groups they are going a Tat-A-Long with Jan's Monster doily. I thought, what a great motivation to finish mine. I didn't have any of the size 12 pearl to keep going on my half finished one, so I loaded up some shuttles with what I had. 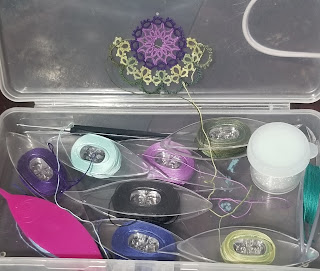 After starting, I didn't like the way it was working up. I put that aside and was fiddling with some of the metallic thread I got from Hobby lobby. 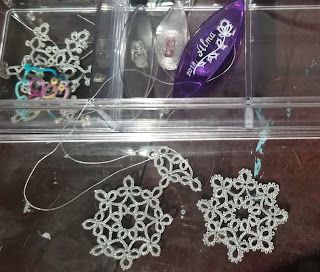 I'm still indecisive whether to have picots or remove them. I worked up a few to test it out. Then I pulled out the first one I began, oh 4 years ago? It's in size 80 thread, which I thought I had but didn't. I gave in and went to Hobby Lobby for some thread. 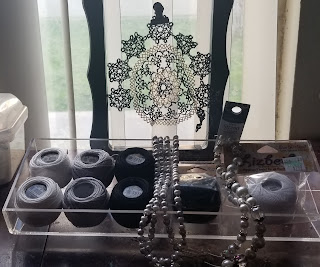 I only picked up one ball of black and white in 80 because originally it was DMC thread in that sample. It doesn't quite work up to the same density but close enough. I did find some silver pearl in 12, they only had 2 balls so I got the same in white and black. Monochrome doily it is, maybe throw in some beads.The Facebook group had it listed as 8 balls of size 12 needed to complete this, we shall see if it works out that way. When I got home I realized one of the white balls is actually size 8 not 12 so another trip to exchange it.

I seem to find myself busier than when I was working and it's only been a weekend! I want to take a couple of months off before going to find another job. My Honey thinks it's a good idea, time to decompress. It's nice to have a supportive partner to give you time to float away once in a while. This week I will have to reorganize and clean up the MomCave. It's hard to focus on your creativity when you are surrounded by clutter. I also have some goodies that I accumulated as my store closed. As I clean up and organize, I'll start posting pictures of it.