Finally finished crocheting the body to the Pokemon Trainer. I ran out of thread near the top of it's head, so I used the closest color I had on hand. I'm not too worried of the color difference, it will have hair to cover it. Now I'm moving on to the clothes. The shoes are so hard for being such a simple design. I have to crochet around the leg, otherwise there is no way to get the boot on afterwards. The base of the foot is too large to fit through the opening. So this doll, will have knee high boots, thus it has become a female trainer. This will never be made again, at least not in this size of thread. Definitely a size 10 or yarn project from now on. My poor hands are starting to cramp up from holding the thread taught enough to be able to crochet with. The bad thing about working in this size thread, is that if I didn't finish the round in one session, I had to rip it all out and start over again. I had re-worked those limbs too many times. 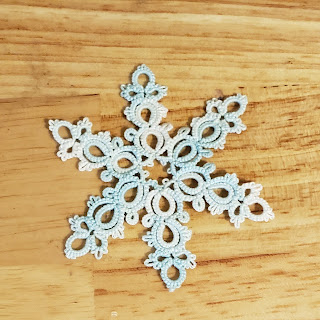 The snowflake is done. It didn't even need to be stiffened! I should probably stiffen it though, to just make sure it keeps it's form. 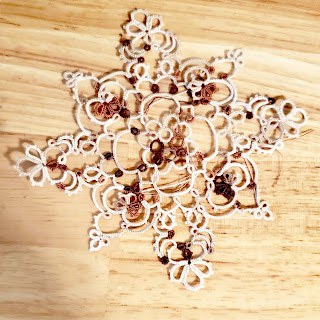 This is the first few rounds of the Anna Doily. There's a few more rows I can add to completely finish it. I put it aside at this point because I had to shift focus back on the crochet portion of the fair entries. It still needs it's ends to be sewn in and to fix that one flower motif I missed joining to the previous row. 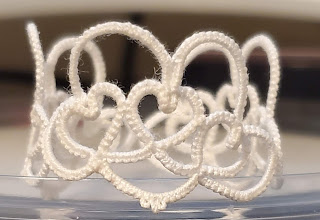 On the Rainbow contest, I have finished the cloud my rainbow hearts will be joined to. It is three of the Iris Derby Hearts by Ruth Perry from the Tatting Calendar, which is in turn a variation from Esther's hearts also on the Tatting Calendar. It made sense to have hearts in the cloud so the rainbow hearts will trickle down from it. There's also and idea to tat up a larger heart in the center of it, in variegated rainbow splash color to make it seem like it's being spread through the cloud. That will all depend on how much time is left over from crocheting. For the butterflies, I haven't settled on one pattern, but I think time-wise, it would be better to do that, just tat them up in all the thread colors I have and arrange them up in a appealing manner.
Email ThisBlogThis!Share to TwitterShare to FacebookShare to Pinterest