The last of the entries. 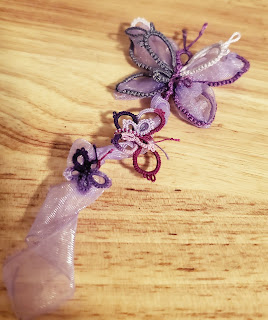 For the Butterfly contest, I went with Frivole's Papillion. The really liked the ribbon on the wings. I happened to find some size 10 thread so I worked the top in that, then moved back down to size 40 for the last two. 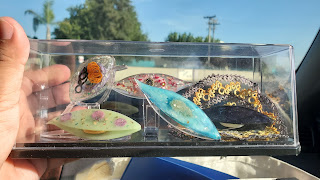 This is the display set up for the tatting shuttles in the " Collection" category. When I dropped them off a few of the ladies there were asking if I take orders for the little rose shuttle. I told them I was out of supplies for now but if they were still interested, I would take their contact info when I pick up the entries after the fair. I did leave them with a quote of how much it would cost so they can think it over. I honestly don't want to make any right now, but I feel if I don't keep in practice when I want to actually make one, I won't be able to replicate it properly. It has happened to me before. 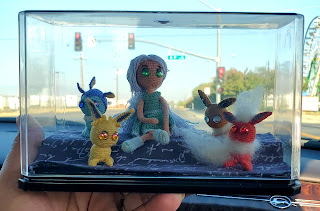 I could not manage to do the embroidery for the faces on any of these. I just put some jewels in place of the eyes. They look creepy to me. Okay, maybe not the trainer and Vaporeon,(blue one) there in the back next to her. The others look bad. They look like alien creatures..lol. I'm gonna practice making more dolls in the proper yarn size so I can practice making the faces. However, not anytime soon.

The chameleon lost a leg and it was a mad dash to repair it before I turned it in. It made the most impact of all the entries. They called everyone over to ooh and ahh over it! I was so proud of my work. I'm pretty confident it will get a ribbon. One of the people there told me that my tatting was the only submitted, as of the time I was there. He told me, that he was hoping the gentleman who entered his last year would submit again this year, but his name isn't on the list. They are putting most of my pieces in the locked cabinets mounted on the wall so they're more protected. As I was leaving, I heard them discussing how to best showcase the chameleon so it can be easily seen.

The fair's opening day is Wednesday, I'm going to see the exhibits and how I did. My kids want to go but I can't be exposed to the air there for too long. I don't think they'll let me wear my allergen mask there, so we'll see how it goes.

Now it's time for a well deserved nap. I have started my internship and still have some classes, so my days have been very hectic and tiring.
Email ThisBlogThis!Share to TwitterShare to FacebookShare to Pinterest