This was my first Thanksgiving spent at home with my family. It felt wonderful. I spent time crocheting and drinking tea. I was in search of a slipper pattern that looked nice but was fairly easy to make. I made a sample of a few different pairs before I settled on two that I liked. The first one was very warm when I tried it on. I used two threads of Simply Soft because I did not have any Bulky thread to work the pattern as it was meant to be worked. It was way too big for my feet. It did fit my Honey's feet nicely though. 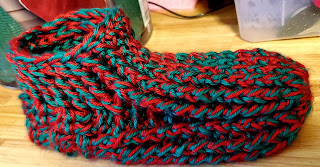 This was one that will be lovely in a more flattering solid thread. I used a size J hook to work it up. I made mistakes on the sole and it protruded out in the front. Again, too big for my feet but too small for Honey's. At least I have found a use for that camo-colored yarn, samples. I may just use the recommended I-hook for this yarn size and see how that turns out.

I got a notification that Starbucks was giving their Visa card members two free coffees every weekend for the rest of the year. Guess where I went? I don't normally drink their coffee, it's too strong for me, but I love their Caramel Brulee lattes. 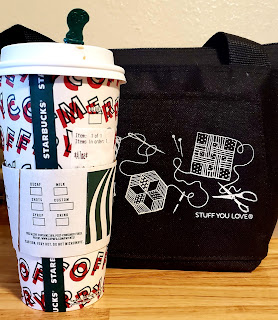 After getting my caffeine kick, I switched over to tatting. I wasn't sure where I was going with this, so I set it aside and decided to work up some Ice Drops. 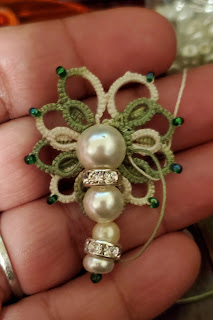 I brought out my mini L.E.D. lighted tree to hold the Ice Drops as I make them. Tenchi immediately set to try and chew up the tree. I move it to where I felt he wouldn't bother it. He got upset and sat there, harassing me for the rest of the night. The larger tree in the living room is up and he leaves that one alone. 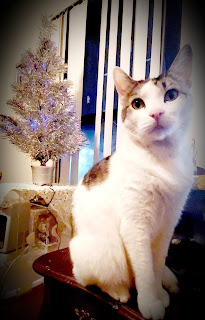 Which IceDrop to start with? I had downloaded a bunch of them from the Facebook group. I just put them in a folder and began working them in alphabetical order. This is the first one: Barbara's Snowflake. It's worked up in size 20 Lizabeth. I did make a mistake and only made five rings instead of six in the starting base. Rather than cutting and starting over, I just kept working so I have a five point snowflake instead of a six. 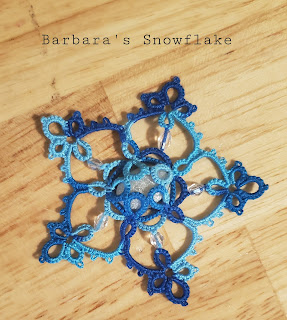 After making it, I added an ornament hook and placed it in the tree. Unfortunately, it kept slipping off. I bent the hook so it could stay in place. 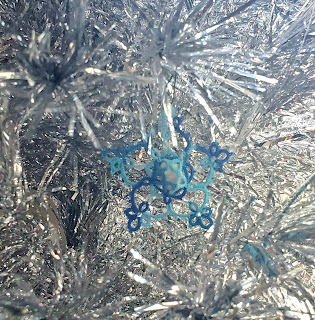 Not liking how it kept falling off, I was thinking of using ribbon to tie it in place. Then I came across a bag of earring fobs that I had forgotten about. 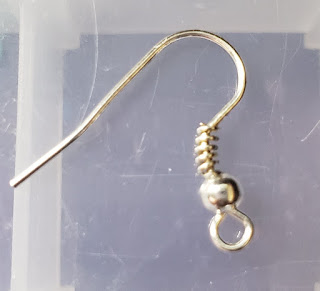 I decided to just use these instead and I can bend the ends to fit the tree. I can also just tat onto it directly. I began the next IceDrop. This time it's Beaded Ice Drop from Nicola Bowersox. I began working this is size 40 thread. They are two different colors, both missing their labels but pretty sure they're both Lizabeth. I think I can safely say all my size 40's are Lizabeth. 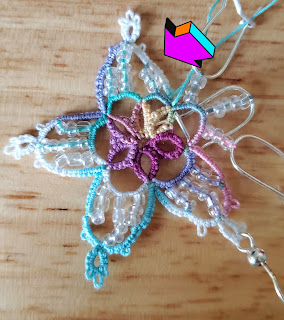 Okay mistakes are being made again. I didn't notice until I was working round two. I left out three of those beaded arms. I think I did this when I was using the same stitch minder to hold multiple arms instead of one. This one I cut and tossed. Then I realized that the IceDrops are all worked in size 20 thread. I don't have much in this size so my drops will be mostly blues and greens. Going to restart this again in the 20 thread.