In a tatting mood 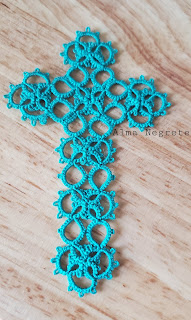 This cross design is from Teri Dunesbury. I didn't add any beads to it, just did the tatting directly. This way the recipient can use as a bookmark or hang it, or do whatever else they'd like with it. I have to express ship it so they'd get it on time for Christmas.

I took a break from tatting to surf Pintrest for some new nature pictures to use as my computer background and ran across these photos. They are both beaded versions and thought wouldn't it be nice to make a tatting version of them? 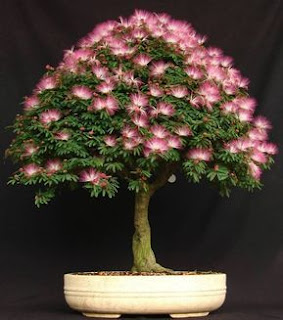 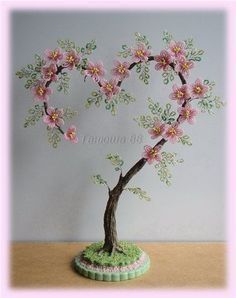 I prefer the heart shaped tree over the fuller one simply because of the time it would take to create it. I do not want to spend months on it. The first picture took the artist 10 months to make! It is beautiful though. I thought about what flowers to use and thought of using my ribbon flowers for it. It will be too large if it I do that. I want the tree to be a bonsai type of set up. Then it occurred to use Be-Stitched's Magnolia flower! For the leaves I couldn't decide if it should be a simple or fuller design. I have a few maple leaf style that would be good to fill up the negative space with. Tatting up a different styles might make it easier to decide on what leaf patter to go with. I began with Linda Davies Rose Leaf pattern. Then did one of the branches from Jennifer Williams' Christmas Tree. 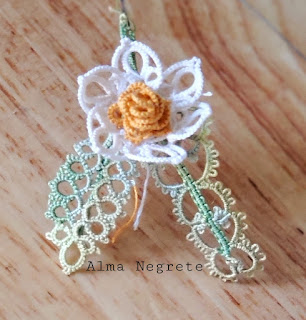 Here they are together for a start. There's still a few more leaf patterns to tat before I settle on the one which will make up the majority of the tree. Inspiration has struck and I have to ride this train out. I did want to make some tatting shuttles but this holds a larger interest for me right now.