I came home to a package from Japan! 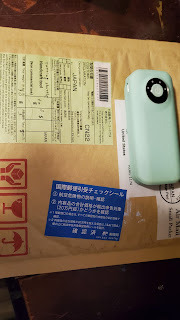 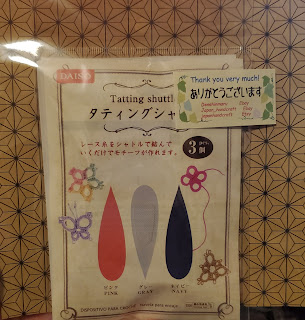 I had some Paypal credit and couldn't think of what else to spend it on, so I ordered some Daiso shuttles. These were repackaged, but since they were for the collection, I don't mind. I went back to working on hearts and the next one on the list has clunys in it. Ugh....This one is from  Elisadusud . I tucked the clunys that were uglier to the back. Then my white thread snapped. I took it as a sign to set this aside. 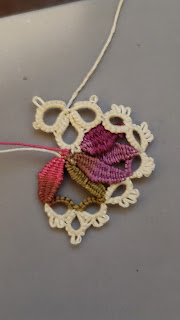 During some down time at work I went about trying to create the calyx for the rose bud. I threw in a random number for the center thread and divided the rest of the elements evenly by it for my stitch counts. It worked out pretty good for a random first sketch. I like how it inadvertently created a heart on one of the sides. I just scrunched it down a tiny bit so the front petal was contained better. 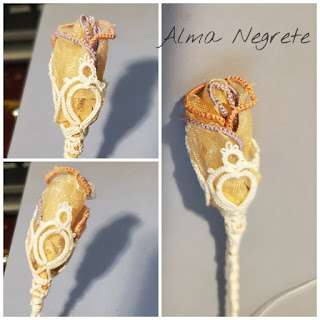 I'm going to have to tat up a few more and tweak the pattern to get that heart in there as part of the pattern itself. Also, to make adjustments when working with size 20 thread. This was made with size 50. Moving on from that, I went in search of a simple pattern I can join in multiple elements. I didn't want to do a magic square type of pattern though. I found this snowflake pattern from HandyHands. It's an adaptation from Sandy. It's a simple stitch count I was able to memorize quickly. 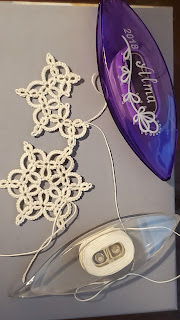