The next crochet project is in the works. A kitty couch! I'm needed a project to use up my yarn scraps. This skein had enough to make the top of the arm rests. It wasn't until I was about to throw away the label that I read it. It is Sears yarn from the 1990's. I never knew they even carried yarn, but I recognize the division tags. 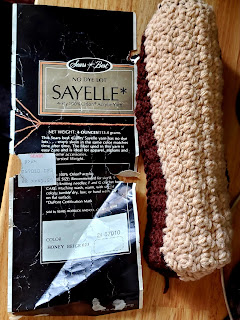 Here we are after using up all the brown shades of scrap yarn I had. It was enough for the front, sides, and most of the top of the seat of the couch. I have a full skein of cream, then some whites I can move over to. I'm trying to keep some feel of color scheme in this project. 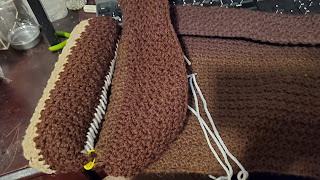 I don't have any foam squares, so I'm just using old pillows to stuff this. Sewing on the arm rest was a challenge. I wasn't sure if I was suppose to sew the bottom of the armrest closed before attaching it to the seat. I am currently halfway done with this project. I got bored with it so I went to look for some tatting to do. I opened up the thread drawer and instantly got irritated when I found this: 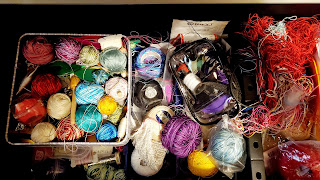 I needed to get it under control. I was looking for some bobbins to wind them onto, and quickly realized that the balls are too big to fit on the bobbins I had. I went online to order some but had a hard time finding the correct wording for the tall style of thread bobbin I wanted. When I finally found some, I hesistated because of the price tag. I was not willing to pay $6 a bobbin for them. I would need at least 20 of them for this drawer alone. I'm a crafty person so I got the idea to make my own. I cut up a wooden dowel and used some resin 'mistakes' to make this one. 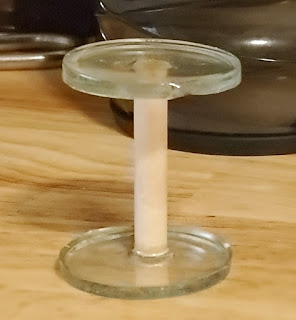 Maybe my eyes were tired, but the dowel is crooked. The spool stands 2 inches tall and I did manage to get this ball all wound on it. The bad part is that it bulged out on one side and when I squeezed it, one end of the spool popped off. The resin hadn't finished curing. I was being impatient. 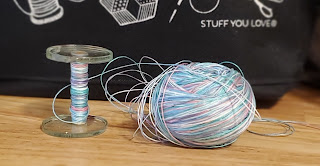 I'm just going to keep looking online for the spools I need. I'll just tat with some white thread since that is in neat order. It has it's own drawer in the thread box.
Email ThisBlogThis!Share to TwitterShare to FacebookShare to Pinterest