I haven't picked up my shuttles in a while and decided to give Karen's  newest cross a try. I quickly realized that I need to work this up in size 20 thread, size 40 is way too tight. I'm going to have to reclaim those beads for the next try. 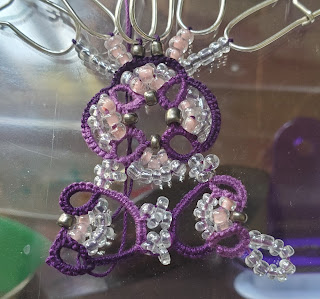 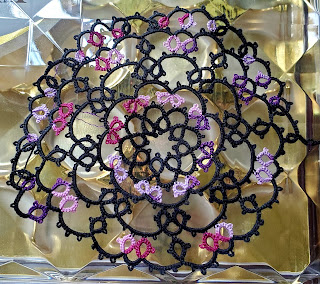 Then I moved on to Jon's 14 day challenge. Now I have seen the final piece that other tatters have made and I like the leaf style motif that comes out. The thought of a stained glass tatting piece really appealed to me. Now I had to lay out where to switch shuttles to get the look I want. I'm mostly through day 5 now. 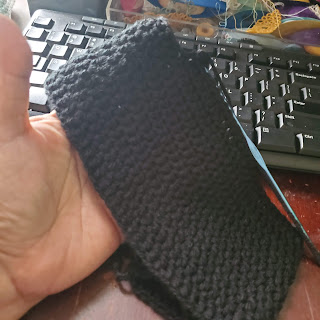 My daughter wanted a new beanie so I got started on one from a Youtube tutorial. I'm using a yarn and hook that is smaller than in the video. I just don't like the feel of acrylic yarn for a hat. I feel that it would pull on her hair too much. I'm using sport weight, I Love This Yarn from Hobby Lobby. It's still acrylic but it feels much softer than regular 4 weight acrylic yarn. 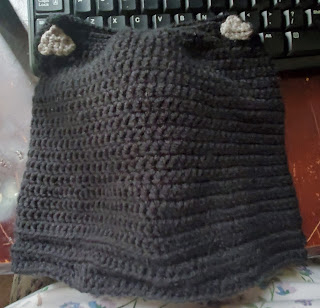 It works up pretty quickly, this is almost finished. I just need to finish the last 5 bottom rows and to stitch on the eyes and whiskers. I had to stop working on it for a bit because of eye strain from the dark color. I switched over to making a crochet doll. I wanted to use some of the thread my sister-in-law gave me. 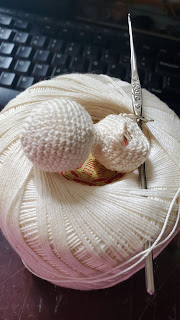 This thread is some vintage J&P coats thread. It's not quite a size 10 but it is really close to it. I got pretty far until I ran out of stuffing. 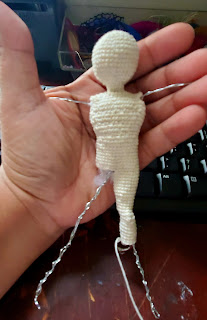 I ordered some online but that's going to take a couple of weeks since it's not an 'essential' item. I should just cancel the amazon order and order from Joann's since I have the option of same day curbside pick up. I had to stop here because it really needs to be stuffed before I can move on. It will already be difficult to stuff the legs as is.

These past weeks are starting to blur into one another. I do not like that one bit. Yes, I have crafts I can work on but I'm not accustomed to just staying home for such long periods of time. It's kind of draining. Okay, time to go work on something else, maybe those shuttle prototypes....
Email ThisBlogThis!Share to TwitterShare to FacebookShare to Pinterest