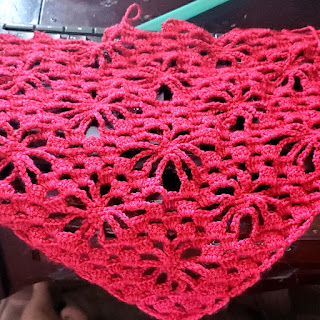 This past week was spent working on my crochet projects again. I wanted to tat, but I just couldn't focus on keeping up with DS counts. At least with crochet, I can frog it and start over, easy peasy. My little one wanted a small cloak. She showed me a video and pointed it out. It was a shawl. Okay, I began with the pink 3 weight yarn I got from Hobby Lobby a long time ago. I figured the "spider stitch" would probably be the easiest to make and work up quickly. I kept measuring it as I went to get an idea of how many of those rows would be needed. It looks like 15 at this point. Then she comes and asks if it's going to have a hood as well. I was not planning on it, so I put it aside while I researched how to generally make a hood. I mean the basic steps regardless of the type of stitches being used. 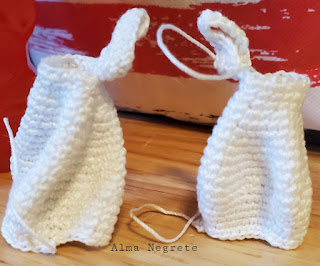 I then began working on the Inuyasha doll my eldest requested as a birthday gift. I wasn't sure if she wanted it more chibi style or realistic. I began on working the white under kimono for it, at least the sleeves. There was no pattern I was using, it was just free form crocheting. The one on the left side is the first one I made. I should have at least taken notes where I made decreases and increases. Attempting to replicate it for the other side is more complicated. Now I have to go and count the stitches for every row. The drape on the left one is what I like, it looks so natural.


I purchased this pattern after finding a picture on Pintrest. I really liked the look of it. Now the problem in finding the yarn is the four different shades of the same color. I tried using the yarn I purchased from DollarTree. I didn't have black yarn on hand so I tried replacing it with white. It didn't have the same effect. This pattern is going to have to wait until I can purchase the correct colors to make it properly. 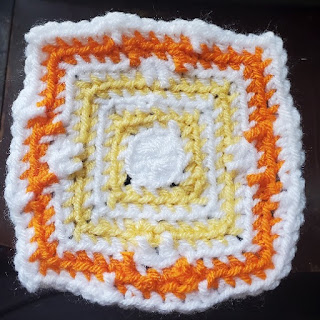 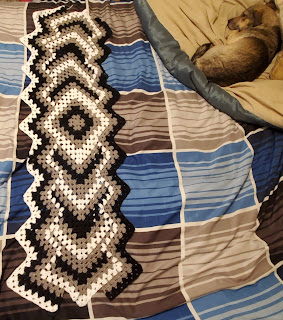 I found a granny pattern that drew my attention and began that. It has several names, but the most common is a Drop in the Pond or ripple stitch. I'm using "I love this yarn!" from Hobby Lobby is sport weight. It feels so soft and comfy. When I began I used the recommended I-hook but started again with a K-hook. I still crochet pretty tight and this is supposed to be a looser stitch. I love how this is working up. The final size I plan on is queen so I can use it for my bed. 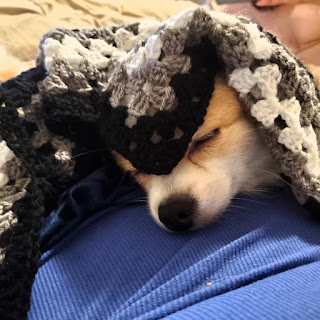 Butters really likes this blanket as well. He snuggled up under it and on me and fell asleep for a little nap. I was tempted to record him snoring again, but I just moved on to something else to work on. 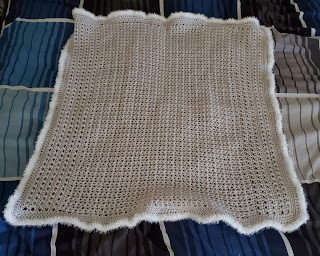 I finished the baby blanket I began a couple of months ago for a coworker. I added the eyelash yarn in two single crochet rows as the edging on the blanket. I was thinking of making her some booties to match. I made the first one. It doesn't feel right to me. I think I'm going to make a small stuffed animal instead. Maybe a cat or a bunny. My coworker is having a girl, and neutral is what I was going for. I may try making the booties again with crochet thread instead of yarn, maybe then it might be more eye appealing to me. 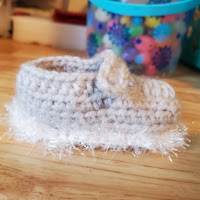 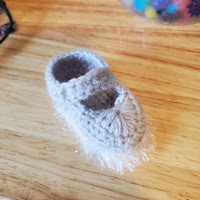