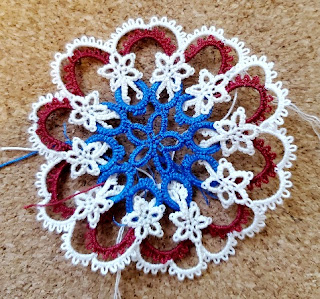 Here is the finished Red, White, and Blue Celtic Motif. I could not find the beading needles I use to sew in ends so for now, it's going into a small box to be finished later. I ordered some more needles from Amazon and they should be here soon. I went to all three craft stores here locally, and none of these stores had the big eye style I prefer, in stock. I did take full advantage of the clearance sells going on at Michael's and stocked up on a bunch of beads and this storage container, which was 70% off. 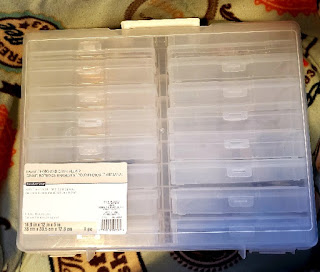 After organizing the beads, my youngest asked me for a pumpkin basket for her odds and ends that she has on her desk. I switched back to crochet and made it for her. 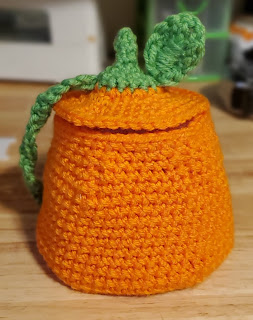 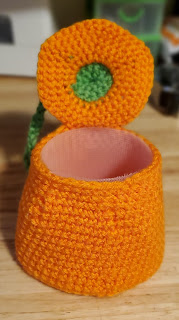 I reinforced with with plastic canvas on the bottom. After posting it on Facebook, I received a request for one. They did request a latch to keep it closed so I got to designing one that would match the basket. 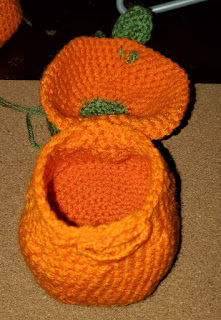 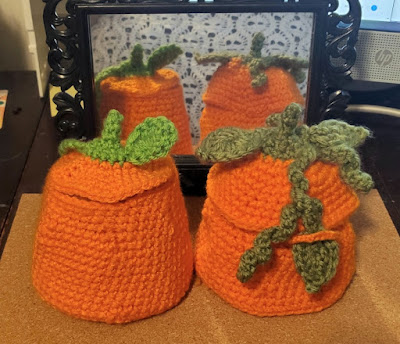 Here they are side by side. I really liked the way the latch holds. This just needs to be reinforced with plastic canvas and off it goes to it's new home. I was surprised on how quickly it worked up, less than a day crocheting. Feeling accomplished with this, I switched back to tatting.

I have sketches of patterns I made from earlier this year for another caylx for a rosebud. Writing it out was the next project of the day or rather night, since I seem to be suffering from insomnia right now. 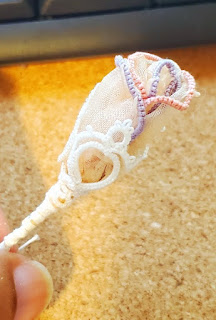 The sticky note I had originally written it has disappeared, so I'm having to stitch count the finished piece. I do remember thinking that I wanted to keep that heart shape in the center so I adjusted the counts. The entire process from beginning to end was video recorded and took about an hour to tat up for me. 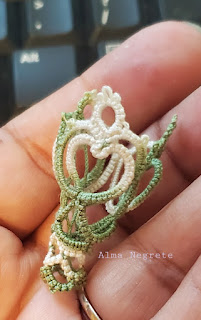 I did make some changes to the bottom of the calyx as well. Cleaned it up so it didn't feel too busy or cluttered. Now I have to write up the pattern. I may as well edit the video and upload it to Youtube. A tatting friend suggested I should sell the pattern verses just posting it for free. I'm currently considering it, since the funds would go to buy more thread....the problem I see here is how to price it.

The crochet basket I made I was offering it for $10. The person purchasing it said I was pricing it too low and sent me $30 for it. I personally feel it's too much for the size, but they insisted. Okay, I offered to make them a second one but they were happy with just the one. It seems to be that I have a habit to under price my work. I had the same issue with the shuttles I decorated, I just let them go auction style because I had no clue on how to price, and use that as a base line for pricing my shuttles going forward based on their complexity.

In any case, first things first, write up the pattern. Any other decisions can wait until that is done.
Email ThisBlogThis!Share to TwitterShare to FacebookShare to Pinterest