I was feeling the urge to be productive in some way. I pulled out the resin and began working on some small shuttles. After printing out some free stained glass patterns from the internet, I got about making them into shuttles.

The middle one was the first one completed. I used all UV resin that I colored with pastel chalks. It looked okay, but not the real effect I wanted. The one on the right is just tinted regular resin using resin specific dye. I had to add a bit of the dye because the color was too washed out. The effect was a bit better. I had problems with the black lines. The resin is too thin and it was difficult to bring out the black without it bleeding into the other segments. The one on the far left gave me the results I wanted. I did a mix of colored resin and painting the shuttle lines. It maintains the "glass" like transparency while still having color saturation in it. 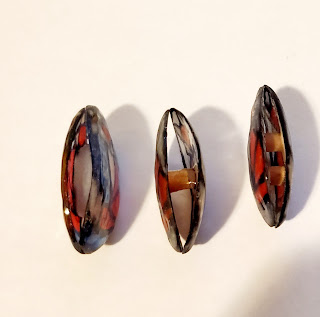 I also tried different post types within. There is a solid middle post, which helped maintain stability but limited the amount of space to load thread onto. The single round post, which holds plenty of thread but not very stable, the blades tend to want to slide. Then the double round post, which is what I like the best so far. It maintains stability, holds a decent amount of thread and saves me the trouble of drilling a hole into the post. Now these are all about 1.5 inches long, they hold roughly 5 yards of size 20 thread. The 3rd prototype only holds about 2.5 yards because of the thickness of the post.

I'm going to tat little projects with them in the coming weeks and see how well they hold up. My latest order of Liquid Diamonds resin should be here by Saturday so I may spend more time making up some more of these for fun. My temporary job should be done by the end of the month and I feel like taking a couple of weeks off before starting the next job assignment. I do have to get my Halloween crafting done.